The Sabres finally got around to retiring Pat LaFontaine's jersey prior to Friday's Sabres-Leafs game. It was also nice to see the Sabres pound the Leafs 6-2 in a game that, despite being in Buffalo, often turns into a Toronto home game because of the large number of Leafs fans present.

Patty was definitely one of my favorite Sabres of all time. It was especially fun to watch him with Alex Mogilny during the early 90s. Made for a lot of fun Sabre games at the Aud.

By far, my best LaFontaine memory was meeting him and getting his autograph at the Aud. He was injured for a stretch of games and we were kind of stalking him during intermissions. We had corner seats at the Aud right between the press box and one of the private exits, and players that were doing interviews in the box always left right behind our seats. I think my Dad was able to get the first autograph, pushing through a mash of people and up to Pat's security. That was cool and all, but I didn't really want an autograph that someone else got for me. I was glad my Dad got to meet him, but I wanted to as weell. I managed to get the one-up though, since I lingered outside my seat as play resumed in the hopes he'd walk by again. Sure enough, Pat came by and no one was around. So I got to say hello and get his autograph on one of his hockey cards. Sweet.

I think my favorite LaFontaine goal came during a playoff game vs. the Flyers. I remember Pat blowing past Eric Lindros at the blue line, basically holding the puck away with one arm and pushing Eric off with the other. He swept around the corner and scored short-side on a quick little wrister. One of the prettiest goals I've seen.

Here's a few pics I pulled off Yahoo of the event on Friday. I thought it was a nice touch to see all of the Sabre players wear the classic blue jerseys with Pat's number on them during warm-ups. 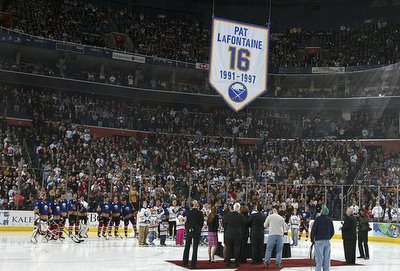 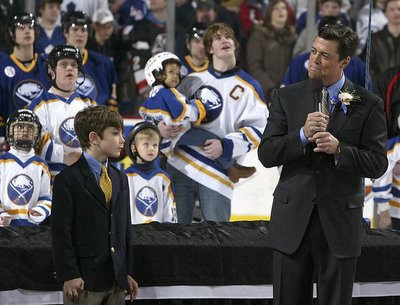 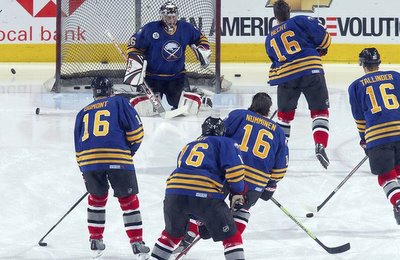