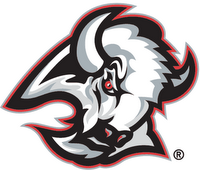 In a cruel twist of fate, the NHL season opens up with Buffalo at Carolina on October 4. Yep, that's right. The boys who used to wear the twisted goat head on their jerseys and who will probably wear ugly UCLA/Nashville Predators uni's now get to watch Carolina raise the Stanley Cup banner to the roof. As if it wasn't bad enough to lose in 7 games to Carolina, especially after blowing leads late in at least two games, now the Sabres get a harsh reminder of just how close they were.