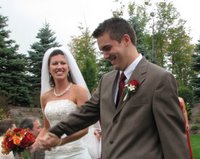 Just wanted to say thanks to everyone for their support over the past few months and for spending the day with us on Saturday. Missy and I had a blast and it was great to see everyone and spend time with our friends and family. Based on the staggering number of people who were, well...staggering, it appeared that most of our guests had fun too.

I'll try to get pictures from everyone who took their own so they can get posted in one place. And in about a month, we'll have the pics back from the photographer so I'll link to those as well. FYI, he had to leave around 8:45 because he ran out of memory cards. He said he took about 2100 pictures and that we were "the best wedding of the year" and one of the "most awesome parties" he's been a part of. So that's a credit to our guests for making this so much fun.

We'll be enjoying Kauai and Maui over the next two weeks, so we'll see everyone when we get back. Thanks again!
Posted on Sunday, September 17, 2006

You both looked so happy. What a great day you had. I hope you are enjoying your vacation, we can't wait til you are back (I bet you can't wait either).