Don't Get Up, Dom. We'll Let Ourselves Out. 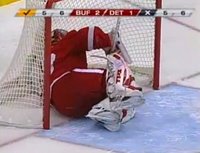 Ryan Miller's third shootout victory of the year ended with this scene: Dominik Hasek laying on his back in his own goal. It's fun to start the season 4-0, winning 3-of-3 shootouts in the process. But it's always a blast when you get to smack around the goalie who bailed on you a few years back so he could buy a Stanley Cup ring in Detroit.

Oh, and can Daniel Briere's shootout goals get any prettier? The best quote from the highlights I watched on NHL.com was this: While Briere was waiting at center ice to take his shootout attempt, Kris Draper from DET asked the on-ice announcer, "Wasn't that Briere who scored against Carolina with the slick move?". All the announcer could respond with was, "Uh-huh..."
Posted on Saturday, October 14, 2006