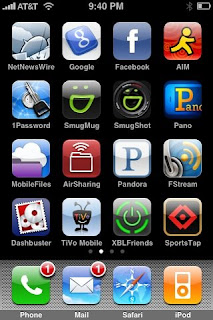 I feel like I'm constantly re-arranging the layout of the apps on my iPhone. My second home screen seems to hold the apps that I use most of the time, because for some reason, I always want to leave the native Apple-provided apps on the first screen. I guess it's a throwback to the original days of the iPhone when those were the only apps I had. Regardless, I have a few new apps that I think are pretty cool and are things I've wanted mobile versions of for awhile.

For photos, I've added Pano to my arsenal. It allows me to take panoramas that get stitched together right on the iPhone. While I'd love to be able to make QTVRs like I do with my Canon shots, it's a nice feature to have when I'm on the go and don't have my camera with me.

MobileFiles and AirSharing are two nice utilities for accessing my MobileMe disk and using the iPhone as a portable hard drive, respectively. While MobileFiles may go in the near future because of my pending MobileMe dilemma (more on that later), I'll keep AirSharing around.

If you've ever wanted to listen to streaming radio on the iPhone, check out FStream. I don't know why it took me so long to find this, but it pulls in the same stations that iTunes has access to, so I've been listening to more internet radio lately just to get some variety. The main reason on I wanted this app was to stream Air1.com to my phone.

Lastly, TiVo finally released a mobile app. It's not a native iPhone app like I had hoped, but I guess there's no reason it needs to be. It's just a simplified interface for remotely programming your TiVo, and it works flawlessly.

Now, if only I could get a better solution for posting to this blog...
Posted on Thursday, December 11, 2008