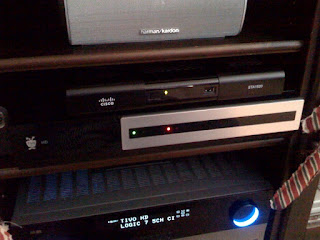 As much as I loved the TiVo HD I received as a Christmas gift last year, one of the biggest issues I had was the inability to watch switched digital video (SDV) channels that Time Warner was converting most of its HD channels to. Luckily, TiVo stepped in to co-develop an adapter with the NCTA to allow TiVo units to work with SDV. While promised in the second quarter of 2008, I knew they'd be delayed and I just received mine this week.

While most blogs called this a "dongle", this is most certainly not a "dongle". A dongle is the little USB Wi-Fi adapter that hooks into the TiVo. This may as well be a full cable box. While it can't function on its own, it's basically the same size as my HD cable box that is collecting dust in the closet. So much for loving the TiVo because its Cable Card allowed me to have one less device plugged in at my TV. This new SDV adapter basically reverts everything back to the Series 2 days where you had a digital cable box feeding the TiVo.

Oh well. At least I've finally got full access to the HD channels through my TiVo interface, instead of being forced to use the craptastic Scientific Atlanta interface. HD Sabres hockey, here I come. A year late.
Posted on Thursday, January 01, 2009